I always wanted an Appaloosa as a kid.  It wasn’t until I was 50 years old before my dream came true. In 2001 I found Hawk, a Snowcap Appaloosa…exactly what I wanted.  Once I got Hawk I wanted to raise a baby, really wanted a Warmblood.  In 2011 I heard about a little 7 month old Oldenburg colt, we named PShadrach, who had some health issues.  The owner had been advised to put him down but since he was the first offspring of his sire he was saved and I got him for a dollar…exactly what I wanted.  Then I always wanted to have a baby born on our place because I wanted the experience of a newborn.  In 2012 we adopted a preggers jenny who in Oct 2012 gave birth to a beautiful tri-colored jenny; we named Molly…exactly what I wanted.  We also have a 29 year old Thoroughbred gelding, Joey.  We adopted him when his owner died and was abandoned.  All these horses are rescues.  Hawk I did pay for but I got him out of a bad situation.  I wanted babies because I saw so many horses with issues of not being socialized and no being desensitized.  I just felt I could make them just what I wanted.

Hawk has a big brother personality.  He likes to pick at his new buddies; sniffing to get a kick or a squeal.  I try to run ramrod to keep him (me) from getting kicked.  It has taken me twelve years to grow Hawk to a wonderful trail horse.  When I began trail obstacles we were lucky to get a score.  I had to teach me to teach him to slow down and listen to me.  We began in Northern Virginia participating in their Crystal Crown Series; a 10 mile six obstacle, 5 ride competition.  I have learned patience from him.  Hawk has Western, English, and Dressage in his resume.  As of last year, 2012, we began picking up blues and reds in ACTHA CTCs.  We dropped dressage, just doing better in ACTHA.  As of today we have placed first in the State of Florida, and now running second in FL and about 2 points from tying for first, again.  I am so proud of him.  Hawk and I are a team…exactly what I wanted.

PShad came to us so sick.  I was so afraid we have to put him down.  He had big knees, long legs, big ole; ugly head, pencil neck.  I was so in love.  He was on stall rest for months,  injections twice a day, poked and prodded, ate his feed with bute and SMZ as if it were ice cream; stood quietly for wound cleaning and fresh wraps.  Instead of hating people he saw us helping and chose to be loving.  Today he is 3 years old and 17 hands and a pleasure to work.  Trey Young used PShad in a colt starting clinic.  In an hour Trey was standing on PShad’s cracking a bull whip with a foot cocked, herding cows and executing flying lead changes.  PShad will be entering ACTHA CTC in the fall.  When Molly had her first trim he stood with her in his stall, nibbled on her ear to calm her during the process. 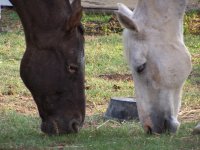 Joey (pictured on the left) is the best heard boss.  Joey rules with a kind hoof.  Joey and Hawk have done a fine job raising PShad.  PShad has mixed things up for the older boys and keeps them on their toes.  The two older boys have been very tolerant of this young horse.  I have a great little heard of equines…just what I wanted.

Many thanks to Durvet Apple Wormer for sponsoring “This is my Trail Horse”.  Cyndie will receive a gift from Durvet. www.applewormer.com

It is the mission, duty and purpose of (ACTHA) to address, educate, coordinate, and provide aid and relief to unwanted, unused, abandoned and abused equines on a national level.

ACTHA’s mission to provide a venue for the trail rider to participate in the sport of competitive trail riding, focuses on educating participants on all aspects of the equine, care, training, as well as the importance of being a good steward of our natural resources (land, water, and the animals entrusted in our care). To create an enjoyable venue showcase the wonderful attributes of the great American trail horse and granting the recognition they so richly deserve. Leading by example, ACTHA donates 20% of it’s member rider proceeds from each event to registered 501(c)3 organizations (usually equine charities providing care for horses in need), and provides a vehicle for organizations to raise funds to support their cause. Our mission focuses on creating and enabling humane treatment and employment options for every able bodied equine, reducing the burden on local, state, and federal programs to support the ever growing problem of unwanted, unused, abandoned, and abused equines. To further our mission, ACTHA will create and maintain a registry open to all breeds and a point designation system which will stay with each horse for it’s lifetime, thereby adding to their value and distinction.